DBI's new extension offers many new opportunities within fire testing. With the new building, DBI is also upgrading new with course facilities and office space. All to gear the business to customer needs.

The construction has been going on since last summer, and in May DBI was finally able to use the newly built 2000 m2 at Jernholmen in Hvidovre. The new square meters contain a new façade test hall, state-of-the-art course facilities and office space for 60 employees. In addition, a new, extra-large multi furnace for fire testing has been installed.

- With our new fire testing facilities, we can now offer façade testing and generally support construction product manufacturers even better during their product development. At the same time, the new course facilities make it possible to keep up with the increasing course demand that we have experienced in recent years. In addition, we now have enough room in relation to the staff growth we have, says Jesper Ditlev, CEO at DBI

The new façade test hall is 15x18 meters by 13 meters to the ceiling. This makes the hall large enough for two test rigs prepared to test according to the Swedish facade standard SP Fire 105. Which requires a test item that is 6 meters high and 4 meters wide.

- However, the test hall is designed for even larger test items. As the new pan-European façade standard that is under development, will probably require a test item that are 8 meters high, says Andreas Norsk, Resistance to Fire Engineer in the DBI's fire testing department.

In addition to regular classification tests, it is also possible to perform more experimental tests in the hall, which is an inexpensive way of creating value and knowledge about a product for the customer.

The new multi furnace has a maximum power of 10 megawatts, which is twice as much as DBI's two existing furnaces. The increased power means that the furnace cannot only perform the standard fire curve (834), but also the hydrocarbon fire curve, which simulates oil fires, which for example may happen on an oil platform. It also makes it suitable for fire testing of ship structures.

- The size of the furnace offers also possibilities I relation to fire doors, as we now can test both sides of a double-door in just one test. In addition, we can test large ventilation shafts up to 2.5x1.5 meters and loaded columns up to 80 tonnes. And finally, the extra width of the furnace enables more test types of passages and tests of more details in walls, says Andreas Norsk.

Do you want to know more about the new test facilities? 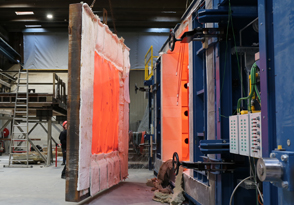