A robotic arm can save facades

Facade fires are a challenge that has been debated greatly in recent years. But now there is a new solution that uses existing technology to combat these dangerous fires in a new way.

A fire breaks out in an apartment in a high-rise building. It spreads and quickly breaks through a window. The flames spread through the broken window pane and threaten to ignite the facade, with the risk of further fire spreading. This is a well-known issue that has received a lot of attention in recent years – not least after the fire in Grenfell Tower in London.

But shortly after the window has been broken, an arm horizontally shoots out of the building. There is a nozzle on the arm, which directs itself towards the fire in the window, and sprays water onto the facade. That's the idea behind Spraysafe, a solution developed by Johnson Controls.

- It combines detection on the facade with a nozzle that automatically ejects from the facade. There are several infrared detectors on the facade, and using triangulation, the solution calculates where the fire is and where the nozzle must direct its spray. The smart thing about the solution is that it uses well-known technology to deal with a current issue, says Lars V. Roed, Fire Safety Engineer at DBI – the Danish Institute of Fire and Security Technology.

Spraysafe can help to tackle a challenge faced by high-rise buildings. Because height makes it difficult for emergency services to fight a facade fire. At the same time, the solution can react faster than the emergency services and begin fire-fighting immediately after fire has been detected on the facade.

The testing institute, Thomas Wright-Bell International Consultants, has tested the solution according to SP method 5483, which investigates its range and ability to aim the water jet at the fire. Furthermore, it has been fully tested in a set-up that is identical to the Swedish SP Fire 105 standard, to investigate the effect of the solution in the event of a fire. The results were presented at a Society of Fire Protection Engineers conference in Malaga last year.

Alternative to replacing the facade

The tests show that the solution can prevent a fire from spreading along a facade. However, this does not mean that the solution is ready for use in construction. This depends on the regulations of this field in each individual country.

- But it looks interesting. Especially if the solution can be retrofitted to facades. In such a case, it may serve as an alternative to replacing a facade that is identified as a fire hazard. This is something that has been discovered about many facades in the UK, among others, after the fire in Grenfell Tower, says Lars V. Roed. 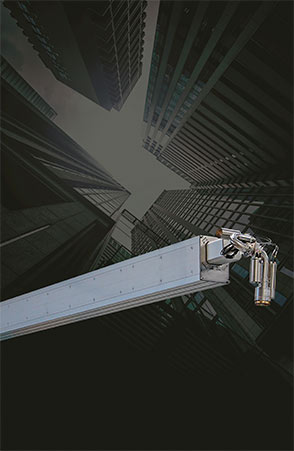