Fire safety in the EU

A lot can be done for fire safety in the EU. Member states must therefore learn from each other and focus on this issue in the EU's coming 'renovation wave'. So argues Pernille Weiss, member of the European Parliament for Denmark's Conservative People's Party.

As part of the EU 2019 budget, proposals were put forward to improve fire statistics in Europe. What happened with the proposal?

- The Commission allocated money to a pilot project. This means that statistics are now being collected in this area and we can therefore identify what we need to do better. Since then, I have followed up, among other things, by hosting events in the European Parliament, where we have focused on fire safety.

What are the possibilities of joint European cooperation to enhance fire safety?

- Fire safety is basically a national matter. However, it is extremely important that we learn from each other across Europe. We are far from being equally good at protecting our citizens from fire, and we need to learn from those who do it well. Furthermore, it is important, of course, to have high standards of fire safety in the products we produce in the EU and in those we import.

What can be done to reduce the number of people who perish in care home fires?

- It's up to member states to a great extent. It's clear that we need national rules on how to protect not only newly built, but also older care homes against fire. A lot has happened from a purely technological standpoint and it's important that our buildings keep apace. At the EU level, it's very much about ensuring that the products we allow in the internal market are fire-safe.

What is happening on the subject of fire in the EU?

- The study on fire safety across the EU is a major step. In addition, the Commission has proposed a 'renovation wave'. The purpose is to reduce energy consumption in buildings, but it's clear that there are many of us who want to fight for fire safety to be incorporated when plans for this 'renovation wave' are presented.

In what direction do you see the work in this area going?

- It’s still too early to say. However, I see that there are several of us in the European Parliament who focus on fire safety, and this is a good sign. I've made an effort to draw attention to the issue by organising several events where politicians and industry people have met each other – because it's important that we politicians talk to the experts. 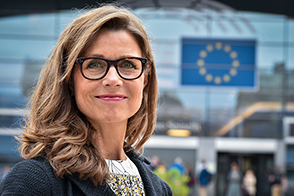