Fire and explosion in battery compartment in Norwegian hybrid ferry

In October, the Norwegian hybrid ferry “Ytterøyningen” was hit first by a fire and then an explosion. The cause of the fire is still unknown, but the incident has resulted in increased focus on other hybrid ferries which are in operation.

In the early evening on 10 October 2019, fire broke out in the battery compartment on the Norwegian hybrid ferry “Ytterøyningen”, which runs the route Sydnes-Halsnøy south of Bergen. The fire department and the police were alerted, and the fire was declared under control a couple of hours later. 15 people were on board, of which two needed to be checked by a doctor due to suspicion of smoke inhalation.

However, at 7:00 the next morning, the ferry was shaken by an explosion in the battery compartment which was so powerful that the car deck was pushed up. Now, a couple months later, there is still no official accident report from the Norwegian authorities of the incident, so the cause of both the fire and the explosion are still unknown. Still, several experts have come forward with some general assessments.

- The battery pack on Ytterøyningen was just under 2,000 kWh, which according to DBI’s experts in lithium-ion battery-fires suggests that the fire was not in the battery itself. This is because fires in much smaller batteries can take several days to extinguish. Therefore, the fire probably started somewhere else and then spread to parts of the battery compartment, says Carsten Møller, who is a business developer at DBI, the Danish Institute of Fire and Security Technology.

In addition, yet another unanswered question is whether thorough ventilation of the battery compartment was initiated after the fire was extinguished, since a damaged battery can leak explosive gases. Even minor physical damage on the battery can develop, posing problems over time, since chemical reactions in some of the materials can occur.

- However, this is usually not a problem, since the battery management system (BMS) normally alerts in good time, e.g. of gas formation and increases in temperature, says Carsten Møller.

Still, after the fire, it has now emerged that Ytterøyningen’s battery pack was not in use or connected to the management system during the two weeks prior to the incident.

While a clarification of the cause of fire is being prepared, the Norwegian Maritime Authority recommends that battery packs on ships must always be connected to a battery management system, also even if they are not used for a period of time.

Whether the incident has consequences for some of the other hybrid ferries in operation is difficult to predict as long as the cause of the fire is still unclear. Work is currently being done in Norway on a conversion of the country’s many small ferries to battery power. Thus, 60 ferries are expected to run on battery power by the end of 2021. 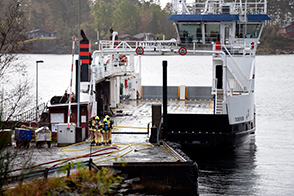