Cars can burst into flames a long time after they have been damaged. They can be exceptionally difficult to extinguish. They can flare up again and again. They emit combustible and harmful gases. Water is contaminated and damaging to the environment due to chemicals. Yes, the batteries in electric and hybrid cars present numerous challenges when you look at it from the point of view of the emergency services. This is the conclusion of a new report from the Swedish organisation RISE, which has taken a closer look at lithium-ion batteries in vehicles.

- We are seeing more and more electric and hybrid cars in the municipalities we cover. And, it would appear that there will be many more in the future. That is why we must be able to deal with the chemical fires they can cause, says Michael Kim Andersen, Deputy Director of Emergency Services in Copenhagen.

The individual cells in a lithium-ion batter can be damaged in the event of a traffic accident or if there is a fire in the car. This can result in the development of heat in the cell, which then spreads from cell to cell – also known as thermal runaway. A chemical fire in a lithium-ion battery can develop very quickly with shooting flames and harmful flammable gases. Heat can develop several hours after an accident has occurred, and if one cell has thermal runaway, the heat from that cell can cause the neighbouring cell to develop heat too. This way, a single cell can start a chain reaction which can cause the battery to burst into flames a long time after an accident has taken place. The effects of heat from, for example, a fire, can result in the same effect in a cell.

- Batteries are difficult to extinguish, and they can burst into flames again several hours later – in some cases, right up to a week later. We can't close roads and motorways for several hours, so if it isn't possible for us to extinguish the fire in the battery, we may have to remove the car. That's why we have developed a container for that very purpose, says Michael Kim Andersen.

The container is constructed in such a way that you lift or tow an electric car into it, place the container on the bed of a tow truck and remove the car. The container has nozzles in the floor and on the walls which can be used to both extinguish any flames and cool the battery - which more often than not, is located under the car - to hamper the development of heat. The water for the nozzles flows round a circuit, which reduces water consumption significantly and makes it easier to collect the water later and send it for cleansing if it has been contaminated by chemicals from the battery. In addtion, there are installations with inert gas in the container.

- A fire in an electric car battery is a chemical fire and does not require oxygen. Therefore, inert gas has no effect on the battery but is intended for the other parts of the car. Indeed, the development of heat from the battery can potentially cause the cabin to burst into flames. And since it's a confined space – at least until the windows burst – the water can't get in there. Therefore, inert gas is required to smother the flames, explains Michael Kim Andersen.

With the container, the procedure in the event of an accident with an electric or hybrid car will be more or less the same as an accident involving conventional cars. It is cleared up quickly and the traffic can keep flowing. However, an electric car can't be taken to a car breaker or a workshop where it is placed indoors next to other cars, which a fire could potentially spread to. Instead, it can now be left in the container until the risk of it flaring up has subsided.

- We are in dialogue with other authorities to determine where we can put the container when it contains a damaged electric or hybrid car. It must be kept in an isolated and closed area where it can remain undisturbed for a time, says Michael Kim Andersen.

The container is the only one of its kind in the Nordic region, and the interest in it is high from neighbouring emergency services, who can requisition it on an equal footing with other cars and from abroad. However, it doesn't meet the challenges presented by electric and hybrid cars on its own. Poisonous gases from the batteries mean that special procedures are required when the fire brigade arrive at fires in electric cars.

- If there is a fire in an electric or hybrid car, we are acutely aware that the smoke may contain hydrogen fluoride, which is extremely harmful. Even small doses can result in water in the lungs. Therefore, we also take the precaution of using fresh air breathing apparatus from a greater distance than we would in a normal car fire, says Michael Kim Andersen. 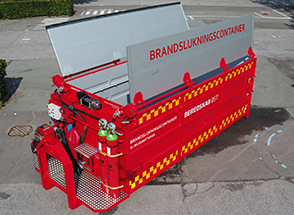