The prestige building, Mjøstårnet in Norway, proves that timber can be used when building to a height. The level of fire safety is high with a number of passive measures and a reinforced sprinkler system, which also covers parts of the facade.

In Norway, the world's tallest timber building is located. It is called Mjøstårnet and was completed in March 2019. The supporting structure comprises enormous glued timber pellets. The stairway and lift shafts are of CLT (Cross Laminated Timber). The same material was also used for the balconies on the upper storeys. The storeys up to the 11th floor comprise a building system of timber and rock wool. And, of course, the facade is also timber.

- Even though we have extensive experience in building with timber in Norway, Mjøstårnet is an unusual building, says Even Andersen, Senior Fire Engineer in Sweco in Norway and fire consultant for Mjøstårnet.

- It is a prestige project in the field of building with timber. The rules in the area have been the same for many years, but it has only been within the last few years that we have started to build to a height with timber. The environmental and climate aspects are of crucial importance in this development, he says.

Withstands a natural progression of a fire
Another aspect that has to be taken into consideration when building timber tower blocks is fire safety.

- The organisation of fire safety is function-based, and takes as its point of departure the presumption that the building must be able to withstand a natural fire progression, which we have modelled on the basis of Eurocode 1, and which takes account of the timber's contribution to the fire, says Even Andersen.

- All scenarios and fire progressions have been calculated and are far shorter than 90 minutes. Moreover, the supporting structure has an even greater resistance to fire than we assumed was needed, explains Even Andersen.

The fire safety documentation is controlled by a third party, and even though the emergency services do not have a regulatory authority role in Norway, they have been involved in the dialogue along the way.

A timber frame remains
In connection with the construction, Sweco had fire tests carried out on the glued timber pellets of which the supporting structure was to comprise. The pellets were tested by SP Fire Research and were exposed to the ISO Standard fire curve for 90 minutes. The test showed that the pellets developed a carbonised surface which protected the underlying timber against the fire. And, when the furnaces were turned off, the carbonisation stopped by itself after a while.

- The glued timber pellets are of considerable dimensions, and a relatively small section of them burns away in a fire. Therefore, they are fairly resistant in a fire. Also, they are self-extinguishing if there is nothing around them to feed the fire. Based on the tests, we have calculated that, in a fire that is not tackled but is allowed to develop and burn out, the supporting structure maintains its resistance and leaves behind a timber frame, even if the rest of the building burns away, says Even Andersen.

Its excellent properties mean that the glued timber pellets do not require any further protection or covering, but that they can be visible in the tower's interior. Any visible timber in escape routes and the stairwell has been fireproofed.

A multitude of fire sections and cells
The weak points in the structure are the steel plates and the dowels placed at the pellet joints. Therefore, spaces and gaps around the joints are endowed with a material that expands at 150 degrees and protects the joints. Each storey constitutes its own fire section, and every single hotel room and apartment is its own fire cell. Every horizontal division structure is dimensioned to be able to remain standing if the overlying horizontal division structure collapses. The horizontal division structures for the top floors are made of concrete, but not because of the fire risk – the concrete adds extra weight to the building, which prevents it swaying too much and making the residents feel ill.

- The facade has been fireproofed and consists of elements which all have cavity barriers in the event of a fire in the cavity. In addition, there are cavity barriers over all the windows, adds Even Andersen.

The swimming pool is a reservoir
On the active side, the building has full sprinkler coverage with a reinforced sprinkler system which also covers the lowermost storeys of the facade in order to prevent incidents due to pyromania or criminality. The communal water supply is good and ensures an abundant supply of water under normal circumstances.

- If extra water is required, the swimming pool – which is part of the building and lies up and down the tower – functions as a reservoir. That is a rarity in Norway, says Even Andersen.

- Building to a height with timber does not go without its risks, and you have to know what you are doing. Mjøstårnet is located in rural surroundings and it is completely different from building in, for example, the middle of the city where the risk of the fire spreading is different. So, even if it is possible to build to a height in timber, that doesn't mean that it is always the right thing to do, concludes Even Andersen. 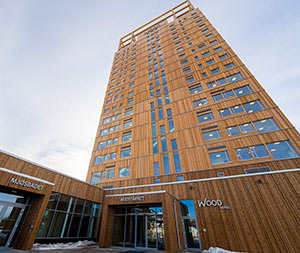