The first report following the Grenfell Tower fire in London has been published. It comes with recommendations for a new building code and fire safety system in England.

The fire at Grenfell Tower in London in the summer of 2017 cost 74 people their lives. The incident sent shockwaves through British society, and numerous studies into the Building Code, the fire and the response have been initiated. How could it all go so wrong? The report, which looked into the fire aspects of the building regulations in the UK following Grenfell Tower and a number of other fires, has now seen the light of day. And, it concludes that new rules and systems are required.

- The report criticises the 'race to the bottom' when it comes to fire safety and fire technical requirements relating to construction in England, where the rules have been liberalised with no thought given to the consequences. For example, it is possible for developers to choose whether their project is to be inspected by local authority or private inspectors and, and at the same time, there are private inspectors who complain that building plans are never rejected, explains fire safety consultant Anders B. Vestergaard, who participated in the 5th International Tall Building and Safety Conference in London, where the Grenfell fire was top of the agenda.

Overall systems rather than individual materials
The situation has to change, the report underlines, while, at the same time, presenting a number of points that ought to be included in the forthcoming revised Building Code. Before the report came out, the public had high hopes that it would recommend a complete ban on the use of flammable materials on the facades of tall buildings. It didn't. Instead, it argues that the solutions used in complex building projects are evaluated on a case-by-case basis whereby the overall solution is looked at.

- It's all well and good discussing the individual materials, but the most important thing is that you give some thought to, and are able to document, the safety of the system overall. It's difficult. In Denmark, there is a tradition of looking at both the cladding and insulation, but, for example, not at how the individual components are fitted, which also play a role in the overall fire safety properties of the solution, says Anders B. Vestergaard.

- A classic scenario is that an architect designs a building that meets all the requirements. However, during the building process, the materials are replaced due to, among other things, the cost. Who has responsibility for that? The supplier has no insight into the final solution, and the developer perhaps has used the material in another context, or just does what he normally does. Therefore, it is unclear who has the ultimate responsibility for ensuring that the finished building reacts as envisaged in the event of a fire, says Anders B. Vestergaard.

This example is roughly what happened with Grenfell Tower, too. Originally, the building was to be clad inflammable insulation and zinc plates, which do not contribute to the spreading of a fire. However, they were replaced with aluminium plates with plastic cores during the building process, which contributed to the spread of the fire.

- Here, the level of knowledge in the industry is crucial. Consultants, inspectors and others must be aware of these things and know the pitfalls, so that something like this never happens,says Anders B. Vestergaard.

With the clear division of responsibilities recommended in the report, it will be easier to check that everyone is fulfilling their responsibilities. And, at the same time, punish those who aren't. The report recommends that greater action is taken in the future and that the Building Code is given 'real teeth' – i.e. the ability to impose serious penalties. Now, the challenge lies in finding the political will to implement the report's recommendations and produce the Building Code outlined in the report. 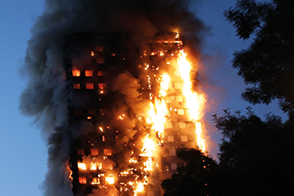