The plastic used in, for example, wheelchairs and dialysis equipment, in electronics and in trains, must adhere to certain standards of flammability and thus also to the methods used to test it. With its new test facility, DBI can now test smaller components in accordance with, for example, the UL94 standard.

Plastic is found everywhere. Not only as large plastic products, but also in all kinds of small components that are a part of larger constructions. If, for example, the main parts of a wheelchair are made with non-flammable material, it doesn't help much if the smaller components are made from very flammable plastic. And it's also important that the dialysis machines to which kidney patients are connected do not include combustible plastic parts.

In order to increase the safety level of a long series of products, DBI's fire laboratory has begun to use a new test facility to test the flammability of smaller components of plastic, rubber, textile and other flammable material.

- We test smaller electronic items such as screens, chargers and computers. The medical industry also needs tests. In addition, we collaborate with a number of suppliers to the rail industry, when components such as switches, mouldings, handles and other small components for Rolling Stock need testing, says Lina Ivar Andersen, Production Manager at DBI's Reaction to Fire laboratory.

Everything can be tested

According to Lina Ivar Andersen, there is no limit to what can be tested in DBI's new test facility. It also provides opportunities for industries where users might be particularly vulnerable, either due to poor mobility such as in the health sector or due to limited escape routes such as in the transport industry.

Can test according to UL94

- With the new testing facility, we can perform a number of tasks so Danish component manufacturers don't need to look abroad to find an independent test laboratory, Lina Ivar Andersen says, adding that DBI's lab is the only independent facility in Denmark testing according to UL94.

The test facility itself consists of a fume cupboard with bunsen burners that can be adapted to the requirements of various standards. All tests can be carried out in accordance with the UL94 standard, which is an American standard used to test smaller components of polymeric materials.

The UL94 standard is comparable to a number of other standards and Lina IvarAndersen emphasises that the test facility can also test according to standards in both the ISO and IEC series.

The UL94 is an ANSI (American National Standards Institution) safety standard relating to the flammability of plastic components in appliances. UL94 is technically equivalent to a number of standards, including IEC 60707, 60695-11-10 and 60695-11-20 as well as ISO 9772 and 9773. UL stands for Underwriters Laboratories Inc. 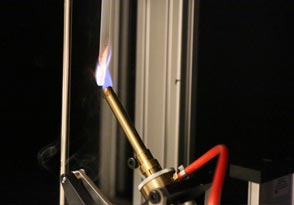