Classic technical challenges fighting fires in high-rise buildings probably played a part in the catastrophic Grenfell Tower fire in London, in which at least 80 people lost their lives.

Exactly what happened, why and how have not yet been completely determined following the appalling fire in the Grenfell Tower flats in London on 14 July. However, it would appear that a series of universal fire safety challenges in high-rise buildings played a central role in the most serious domestic fire in the UK since the beginning of the 20th century.

One of these is the facade, which was renovated last year with a new surface and insulation on top of the existing concrete facade.

- There is still a lot we don't know, but from the photographs, it looks as if the facade contributed significantly to the rapid development of the fire, says Anders B. Vestergaard, fire safety consultant with the Danish Institute of Fire and Security Technology, DBI.

The UK media have reported that the materials used in the construction should not have been used on the building. But if you know anything about building processes, you can easily imagine how they have ended up there.

Change in construction
- Maybe the architect and building consultant originally proposed panels that were more fire-resistant and made the facade safer, then during the construction process, the developer and builder changed them for a cheaper product for economic reasons, says Vestergaard and adds:

- Once that decision has been made, you tend to forget that the facade is an integrated solution and that by changing part of it, you are affecting the whole system. It's a classic development in a construction process that can have serious consequences for fire safety.

During the renovation, windows may also have been moved to increase the light in the flats, leaving the facade insulation – which can be flammable, more exposed to fire and thus compromising the fire-safety unit of which each flat in a concrete tower block comprises.

- And if you don't screen off the area around the windows from the flammable insulation of the facade with a fire-proof material, you're left with a facade where fire can spread unhindered between the floors and between the facade and the flats, Vestergaard explains.

The facade is a complete system
The overall problem is that the facade is not thought of as a complete system but as individual elements. This is what happens when a contractor changes individual products in a system and it's also the case if you imagine that fireproof materials are the only solution in a high building. Because actually, there is nothing wrong with using flammable materials for the facade of a tower block as long as the system is constructed to support its use, e.g. by encasing the flammable material in fireproof material.

- It can be difficult to get right but is certainly possible and provides options with sufficient safety, says Anders Dragsted, fire safety engineer at DBI.

- It may also be that all materials in a facade system are approved individually but become a completely different product when they are put together. Normally products are tested individually but not the system as a whole, as it should be, he adds.

Evacuation
Another well-known challenge with tower blocks is evacuation. In connection with Grenfell Tower’s recent renovation, a system was installed that, in case of fire, was supposed to keep the stairwell free of smoke by creating an overpressure. This was a really important feature as the stairwell was the only escape route for the residents as well as being the only way in for fire fighters. It has not yet been ascertained whether or not the system worked but overpressure ventilation systems are generally difficult to work with.

- In Denmark, overpressure ventilated stairwells have become more common over the past 15 years because higher buildings are being built. This is often a requirement when a building is over 22 metres high, as emergency service ladders cannot reach higher, making safe evacuation via the stairwell even more important, explains Lise Schmidt, fire safety engineer at DBI.

- OTV systems are very automatic and must be finely adjusted to ensure that the pressure does not get too high, otherwise the doors to the stairwell may become difficult or even impossible to open, explains Lise Schmidt.

In recent years, more advanced systems have been developed where the airflow into the stairwell is more constant, and a safety valve or damper in the stairwell ensures that the pressure does not become too high. 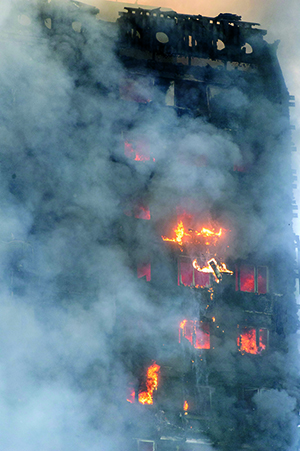